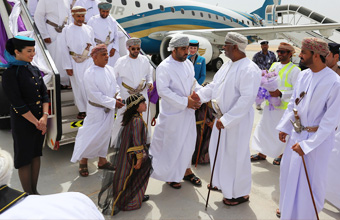 The Special Economic Zone Authority in Duqm (SEZAD), celebrated today, under the auspices Dr. Ahmed bin Mohammed al Futaisi, Minister of Transport and Communications the early operation of Al Duqm Airport.
Duqm Airport is the first domestic airport to start early operation and receive passengers visiting the wilayat, about 550 km from Muscat. The early operation comes in a bid by the government to facilitate movement of passengers and goods to and from the wilayat.
His Excellency Yahya bin Said al Jabri, Chairman of SEZAD expressed his joy for the early operation, which coincides with the 44th anniversary of the blessed Renaissance.
In a press statement, His Excellency said that the route will expedite work at the underway projects and facilitate movement of Omanis and investors to and from Duqm.
His Excellency hailed the efforts made during the past period to ensure early operation of Duqm Airport and praised the coordination and cooperation among SEZAD, Ministry of Transport and Communication , ROP , the Public Authority for Civil Aviation and Meteorology, Oman Air and Oman Airport Management Company
He also commended the success made by Ja\'aloni Airport, which started receiving flights from Muscat since November 2012. \'The route facilitated the movement of investors and citizens between SEZAD and Muscat. It also contributed to enhancing tourism activity in al Wusta Governorate,\' he added.
As part of the operation and management agreement between SEZAD and Oman Air, the latter will operate four flights between Muscat and Al Duqm (Sunday, Monday, Wednesday and Thursday).
\'We are very happy for launching this route between Muscat Airport and Duqm Airport from 23rd of July. The route will boost the economic development in SEZAD, which witness major changes and developments\' said Salem bin Mohammed al Kindi, CEO of Oman Air.
\'Besides providing the long-awaited air transport route, the new service evidences Oman Air\'s commitment to serve the society and its endeavors to enhance the economic development process at the different parts of the Sultanate. The early operation of Duqm Airport will definitely enhance the constantly growing domestic destinations covered by Oman Air\' he added.
The Ministry of Transport and Communication is constructing three domestic airports namely Sohar, Ras al Hadd and Duqm. The works at the Duqm Airport were divided into three packages. The first and second packages included the runway, the taxiway that accommodates four flights including Airbus A380. They also included the road network, the rainwater discharge canals, the electricity network and other. Last
June SEZAD has awarded the contract for the third package, which includes the passenger terminal, which stretches over 5700 square meters and accommodates 500,000 passengers per annum. The domestic airports are designed in a way to ensure easy access and exit by passengers at the shortest time possible with enough spaces for future expansions to cater for the growth in passengers and air cargo through horizontal expansion.
Work is also underway at the air cargo building, with a capacity of 25,000 tonnes of cargo items each year that can be expanded in the future to meet the expected growth in business and economy activity. The third package is expected to be completed during 2016.