SEZAD Calls On Investors to invest in Duqm 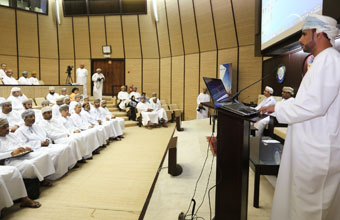 Ismail bin Ahmed al Balushi, Deputy CEO of the Special Economic Zone Authority in Duqm (SEZAD) called on investors to invest in SEZAD saying that the area has many potential investment opportunities in many economic sectors. He described the incentives and facilities provided to investors as \'attractive and encouraging \'.

While delivering the keynote speech at the seminar organized by SEZAD in collaboration with Oman Chamber of Commerce and Industry (OCCI) at the Chamber HQs in Muscat today he welcomed businessmen, women, and assured that the investment pace at SEZAD is getting momentum and thrust.
He affirmed that the establishment of SEZAD aims at achieving a number of aims the most notable of which is to diversify sources of national economy, provide more job opportunities for locals , developing al Wusta Governorate.
\'At SEZAD we endeavor to translate these aims into reality through a number of mechanisms and initiatives including but not limited to preparing the legal and regulatory framework which organize work at SEZAD and streamline the incentives provided to investors. We are also making endeavors to promote the Zone either in the local or foreign markets to attract local and foreign investments.
At the same time, SEZAD also closely monitors the progress made in the implementation of the different projects, identifying the challenges facing these projects and taking the necessary measures to facilitate their implementation. With the support of all stakeholders, such as the government, local and foreign investors, we hope to achieve the aims and objectives behind the establishment of SEZAD\', he said.
\'SEZAD has a number of competitive edges that qualify it to become a regional marine transport hub and a logistic gate for the Gulf region especially it is located at the coastal strip over the Arabian Sea and the Indian Ocean. It is also very close to a number of major consumer markets in Asia as well as the international marine routes that connect East to the West. The vast space of the Zone, which stretches over more than 1747 square kilometer, allows the implementation of various projects at its 8 divisions namely Duqm Port, the Dry Dock, the Petrochemical Complex, the Light and Medium Industries Complex, the Fishing Marina and Fish Processing Industries Complex, the Tourist and Residential and Logistic Areas and finally Duqm Port. These factors ensure that investors have encouraging incentives as the Zone provides them with the required mix that help them set up industrial, business, tourist and social project. In other words, the Zone is a model for the integrated economic city that meets the needs of investors and residents at the same time, he added.
\'Duqm is the first integrated city in the Sultanate that takes into consideration the architectural design, the sustainable development and identifies the needs related to the different uses of land and the needs of residents as well. The Zone, known for its abundant fish resources, enjoys a moderate climate throughout the year. It is also close not only to oil production and processing sites in the Sultanate but also to mineral rich sites that can be a source of raw materials. This means that the Zone has the requirements to be an integrated industrial base for manufacturing industries that utilize the abundant natural resources in al Wusta Governorate, he continued.
\'The implementation of major projects such as the petrochemical and heavy industries complex will provide the ideal platform for setting up a number of downstream light and moderate industries. These factors are complemented by a number of incentives and facilities provided by SEZAD in accordance with the provisions of the Royal Decree No 79/2013 issued on 26/12/2013. The Decree provides investors with an integrated set of facilities and incentives that were designed in a way to meet the needs of corporates and attract investors to the Zone, he furthered.
Al Balushi then highlighted the incentives provided by SEZAD and added that the establishment of SEZAD came in a bid to leverage the potentials of the wilayat of Duqm and utilize such potential in a way that makes Duqm a catalyst for growth in al Wusta Governorate.
Royal Decree No 119/2011 has provided the legislative and institutional framework for the development of the wilayat of Duqm. The Authority then prepared the draft of the Royal Decree about the Regulation of the Zone (Royal Decree 79/2013 issued in December 2013). The Decree specifies that guarantees, incentives and facilities provided to projects in the Zone including the one-window station, which will be established at the Zone.
He pointed out that the two Royal Decrees have provided the legal framework about the management and the development of the Zone. In a bid to provide the Zone with the required competitive edges and increase its competitiveness with similar zones, SEZD provides the following incentives to economic projects:-
As for the powers granted for SEZAD inside the SEZD jurisdiction, Ismail bin Ahmed al Balushi said that these powers include:
At the end of his speech, SEZAD Deputy CEO said that SEZD and the projects that have been implemented there have made much headway and benefits for the Sultanate. Besides attracting local and foreign investments, they have also created a considerable number of job opportunities and enhanced the business activities in al Wusta Governorate in general and the wilayat of Duqm in particular.
He added that Duqm Airport, which started early operation on 23rd of July 2014, plays a key role in transporting passengers between Muscat and Duqm. The benefits are expected to be maximized in the future with the completion of projects.
The seminar included two presentations, the first by Saleh bin Hamoud al Hasani, Director of the One-Window Station on the opportunities and incentives at the Zone.

The second presentation by Dr. Seif bin Said al Hinai, Director of Water System Administration at the Authority, covered the project currently implemented in the Zone.